600,000 Pregnant, No Place for Delivery: Crisis of Flood-Victims 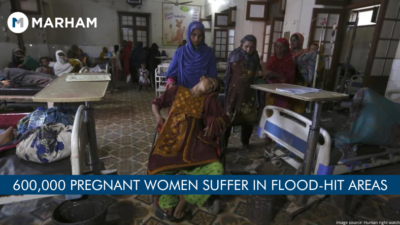 Dr. Aisha Ghous Pasha, Minister of State for Finance and Revenue, stated on Thursday that 600,000 pregnant women in flood-affected areas lack maternal health care and have no secure location to give birth.

She further stated that more than 5 million children do not have access to immunizations or nutritional support, and she advised that Pakistan accelerate efforts to restore reproductive health services for women and children.

According to government data, 19 million of the 31 million individuals living in seriously damaged areas are impoverished.

Reports say that children are living in temporary shelters or out in the open with their families, with no drinking water, food, or a source of income, and are exposed to a slew of new flood-related dangers and hazards, including water-borne diseases, damage to structures, drowning in floods, and snakes.

Thousands of schools, water systems, and health care facilities, on which children rely, have been damaged or destroyed.

This issue was discussed at the 7th meeting of the Parliamentary Forum on Population (PFP) held on Thursday. Dr. Aisha Ghous Pasha, Minister of State for Finance and Revenue, was the chief guest at the event. The Population Council and the United Nations Population Fund convened the gathering (UNFPA).

Samia Ali Shah, Project Director of Population Council, spoke about the plight of women and children affected by the floods in the worst-affected districts, particularly how a lack of reproductive health services was affecting their lives, and how we needed to strengthen community-based providers to help them provide much-needed services to their communities.

Senator Mushahid Hussain Sayed, secretary general of the PFP, stated that Pakistan’s rapid population expansion depletes its resources, exposes people to socioeconomic challenges, and puts them at risk from the effects of human-caused climate change.

Dr. Zeba Sathar, Country Director of Population Council, stated during the conference that floods in Pakistan have exacerbated the pre-existing risks of the underprivileged population.

“More than 22.7 million Katcha houses belonged to the displaced population of severely affected areas. Besides women and children, around one million people over the age of 65 are living in severely flood-affected areas and require special care. People living in agri-climatic zones have lost their cattle and crops and have no access to health services.”

Members of parliament urged the donor community to prioritize the needs of women and girls, who endure a substantial portion of the terrible effects of climate change.

They stressed the need of speeding up the delivery of maternal and newborn, reproductive health, and family planning services, as well as safe spaces for women and girls. In this devastating time, healthcare apps like Marham are playing their part by offering online appointment booking and video consultations.

Maryam is a Nutritionist who firmly believes in the power of words. With her advanced knowledge, she hopes to spread awareness regarding nutrition and health among the masses.