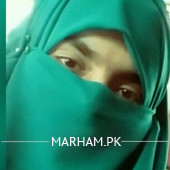 Shafaq Mustaqeem is a qualified Psychologist in Karachi with over 2.5 years of experience in the field of psychology. With specialized qualifications and a broad range of experience, the doctor provides the best treatment for all psychological diseases.

Highly professional psychologists like Shafaq Mustaqeem - Psychologist are mental health specialists who specialize in the human mind and behavior using psychological evaluations, interpretations and talk therapy. They receive high-quality education and training in the prevention, diagnosis, and treatment of psychological diseases. They have an extensive understanding of the human psyche and behaviors.

Shafaq Mustaqeem performs psychological testing to evaluate the emotional and behavioral functioning of individuals and design psychological therapy. The doctor can also make referrals based on the diagnosed illness.

If you are experiencing panic attacks, loss of interest in daily activities, substance abuse, or any crisis that require counseling therapy, you should consult Shafaq Mustaqeem. Shafaq Mustaqeem will decide the number of therapy sessions needed, depending on your condition and prognosis.

Doctor's Experience: Shafaq Mustaqeem has been dealing with patients with mental diseases for the past 2.5 years and has an excellent success rate.

service / treatment is provided by qualified Psychologist like Shafaq Mustaqeem.

Video Consultation
Book Appointment
View All Doctors of in Karachi
×