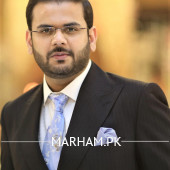 Dr. Ahmad Zaka Subhani is a qualified Gastroenterologist in Lahore with over 5 years in gastroent...

Diseases of the gastrointestinal like stomach and intestines and hepatology like liver, gallbladder, biliary tree, and pancreas systems are diagnosed, treated, and prevented by Dr. Ahmad Zaka Subhani - Gastroenterologist.

A digestive health doctor like Dr. Ahmad Zaka Subhani helps with a variety of digestive illnesses and problems, such as unexplained changes in bowel patterns like diarrhoea, constipation, and blood in the stool and disease of gastroesophageal reflux (GERD) and Heartburn.

Dr. Ahmad Zaka Subhani will discuss your medical history, current symptoms, and any recent therapies you've received with you at your initial visit. They may suggest specific preventative measures based on your age, such as a colonoscopy, which can help prevent colorectal cancer.

Doctor's Experience: Dr. Ahmad Zaka Subhani has been treating patients with all Gastroenterologist related diseases for the past 5 years and has an excellent success rate.

How to book an appointment with Dr. Ahmad Zaka Subhani?

What is the Qualification of Dr. Ahmad Zaka Subhani?

What is Dr. Ahmad Zaka Subhani's speciality & area of expertise?

You can contact the Gastroenterologist through Marham's helpline: 0311-1222398 and we'll connect you with Dr. Ahmad Zaka Subhani

What is the fee of Dr. Ahmad Zaka Subhani?