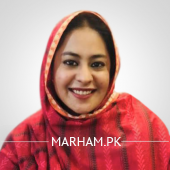 Abeer Naseem a Consultant Psychologist. She specializes in the treatment of Breakup Counselling, Personal Grooming, Career Counseling, Behavioral Therapy and all other diseaes related to her speciality.

Best psychologist I have ever seen. Very humble and good listener. I would always recommend.

Best psychologist I have ever seen. Very humble and good listener. I would always recommend.

Abeer Naseem practices through Marham.pk. The Psychologist has 22 published reviews on Marham.

Experience: 9 years of experience in this field.

The Psychologist's, Abeer Naseem, special areas of interest include:

Diseases treated by Abeer Naseem include:

Abeer Naseem, the Psychologist, is available for in-person and online video consultation on Marham.

How to book an appointment with Abeer Naseem?

What is the Qualification of Abeer Naseem?

What is Abeer Naseem's speciality & area of expertise?

You can contact the Psychologist through Marham's helpline: 0311-1222398 and we'll connect you with Abeer Naseem

What is the fee of Abeer Naseem?

service / treatment is provided by qualified Psychologist like Abeer Naseem.