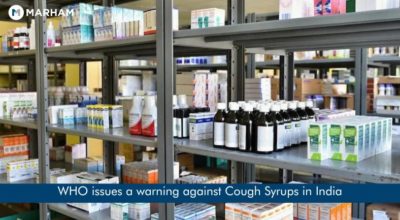 The alert was issued by WHO against two substandard cough syrups AMBRONOL syrup and DOK-1 Max syrup manufactured by Marion Biotec, India after 20 deaths in children were reported by Uzbekistan due to the consumption of the said syrups. In the alert summary, WHO warns of the presence of toxic levels of Diethylene glycol and ethylene glycol in the syrups which is fatal to humans.

However, to date, the manufacturer has not provided any safety or quality guarantee to WHO.

As the syrups have market authorization in various countries, World Health Organization has issued an alert to stop the consumption of these syrups, and if already consumed, contact the medical emergency to avoid the life-threatening effects.

Previously, in October, a warning was issued against a few cough syrups manufactured by Maiden Pharmaceuticals, India when almost 66 deaths were reported in Gambia owing to the consumption of the syrups.