14 Early Pregnancy Symptoms You Should Know! 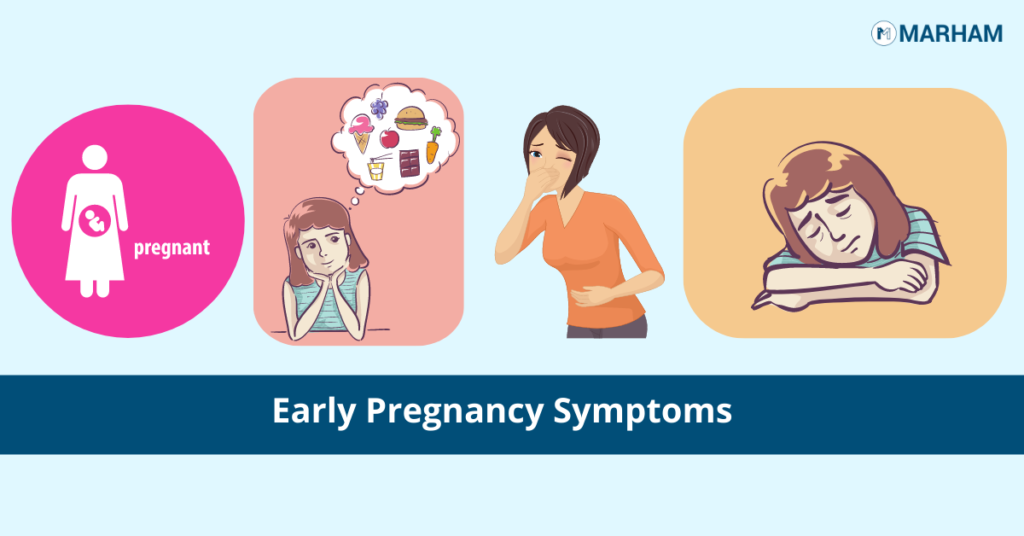 Are you in search of any way to detect your pregnancy before your missed periods? Do you want to know the early pregnancy signs that usually appear before missed menstruation? if you want to know the early pregnancy symptoms, keep in mind they will not appear the next morning after you perform intercourse. Rather, these symptoms appear gradually and indifferent women appear in different ways. So there is no hard and fast rule to know the exact day on which these symptoms may appear.

Here are some important early pregnancy symptoms in Urdu;

When the fertilized egg (embryo) comes into the uterus, it attaches (implants) itself to the uterus wall. That’s why some bleeding occurs from that implantation spot that is known as implantation bleeding. This bleeding is before your period’s date and very little in amount. So if this type of bleeding occurs, you can consider it as an early sign of pregnancy.

Breast size increases during pregnancy. Early symptoms of pregnancy also include painful and swollen breasts. If you feel any change in your body, you can consider it a pregnancy sign.

Tiredness and lethargy without doing any hectic tasks are also some of the early signs of pregnancy. You usually feel low and do not want to do your daily chores.

Nausea and vomiting are considered the most common sign of pregnancy. You feel nausea early morning or because of any sharp smell or aroma. So if you feel these symptoms during the month when you are trying to conceive, consider it as your pregnancy sign.

Feeling hungry most of the time is also among the important signs of pregnancy. In early pregnancy days, your appetite increases.

If you feel cravings for different foods, this can be also one of the early pregnancy symptoms.

The feeling of fullness:

Along with the increase in appetite and food cravings, the important sign you will face a feeling of fullness. That means you want to eat more food, but you can’t. And hence you face confusing situations related to your food and hunger.

Sleepiness and feeling low is another sign. You feel sleepy after taking a good sleep is one sign of early pregnancy.

The urgency to urinate increases and your toilet visits increase especially during the night.

You can also face constipation as an early pregnancy sign.

More saliva in your mouth produces than normal during the early days of pregnancy.

You may also feel the metallic taste in your mouth as an early sign of pregnancy.

Your thirst and need for water also increase. And you drink more water or juices during your early days of pregnancy.

These are some of the early pregnancy signs and symptoms. They vary among different women. The exact and confirmed pregnancy test can be done after you missed your periods. You should perform that strip test 5-6 days after your missed periods’ day. And for the more reliable tests, you can go for urine or blood HCG tests.

For more details, you can consult the top gynecologists of Pakistan through Marham.

She is a pharmacy graduate and worked as a hospital pharmacist. Her interests are teaching, blogging, and scientific writings. She likes to write about medicines, health issues, health and beauty-related natural remedies, the nutritional value of different foods, and mental health.

Can you Take Tylenol while Pregnant?

Can you get tattooed while pregnant- Risks and Precautions