What is the Difference Between Evaporated Milk And Condensed Milk? 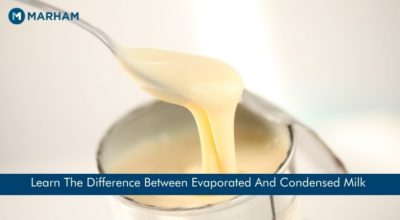 Let’s get down to figuring out the difference!

Both evaporated milk and condensed milk are types of concentrated milk in which 60% of the water content has been removed, but that is where the similarities end.

What are the differences? The main differences between evaporated milk and condensed milk are sweetness and consistency.

The other notable differences between them are given below:

How to Make Evaporated Milk?

To make evaporated milk, fresh milk is slowly simmered over low heat until approximately 60% of the (naturally occurring) water is removed.

The milk becomes creamier and thicker once the water has evaporated. It is then homogenized, sterilized, and packaged for commercial sale.

How to Make Condensed Milk?

Simmering milk and sugar on a low, controlled heat will yield thick, syrupy milk. Once it cools it will thicken and be ready to use. It will last in the fridge for weeks if you don’t need it straight away.

Can you use evaporated milk instead of condensed milk?

Evaporated or condensed milk: Which one is healthier?

Read Also: Almond Milk Benefits – Is it good for your health?

Your problem has been solved and the difference between evaporated and condensed milk is clear. In case you experience any allergic or adverse reactions, we suggest you take an expert’s help. You can also consult a nutritionist through Marham for proper guidance on how to use these forms of milk to reap the maximum benefits.

1. Can you use condensed milk instead of evaporated milk in fudge?

Unfortunately, there are no substitutes for fudge recipes. Condensed milk can be used in place of regular milk in many situations, but not vice versa. Also, do not confuse evaporated milk and sweetened condensed milk as they are two completely different products.

2. Is evaporated milk bad for you?

Evaporated milk is a healthy choice so far, Like fresh or powdered milk, it provides protein, calcium, and vitamins A and D, nutrients needed for healthy bones.

He is a biotechnologist, microbiology researcher and a passionate content writer who loves to generate creative content and enlighten others with his authentic research.

How Many Calories Should a Man Eat a Day?