Over 1,76,153 Acres of Crops were Lost to Floods in Pakistan 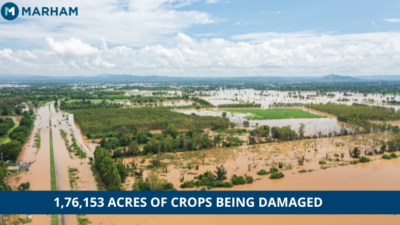 According to the National Flood Response Coordination Committee’s (NFRCC) most recent statistics, flooding across the nation has resulted in over 1,76,153 acres of crops being damaged, 4,66,366 dwellings being impacted, and over 2,16,974 livestock being reported dead.

The NFRCC reports that 1,17,356 homes were completely destroyed by the floods, while 1,60,460 homes were slightly affected.

The committee released information on flood damage nationwide, broken down by province. The NFRCC has declared that it will collaborate with other organisations to provide a low-cost rehabilitation programme for those who are affected.

2,328 dwellings in Punjab were completely destroyed, and 373 were moderately impacted by floods. Flooding caused damage to crops on 2208 acres and the death of 307 livestock.

Over 3,90,201 dwellings are damaged in Balochistan, and floods are to blame for the deaths of 124 individuals. 1,33,994 houses were entirely destroyed, while 94,742 houses suffered minor damage.

1,57,954 acres of crops have been impacted, and 89,234 animal deaths attributed to flooding have been documented.

According to the NFRCC, there have been 23 reported fatalities in Gilgit Baltistan and 8,479 dwellings have been impacted by flooding.

It continued that at least 667 homes were entirely destroyed and 1126 had partial damage. 9,244 acres of crops were harmed, and 609 livestock were reported dead due to flooding.

In these tough times, Marham is providing medical health services to the public of Pakistan. You may also get help from this platform regarding any health problems.

Rida is captivated from experiences of world and showing it here with words. She loves to increase productivity and mental capacities through her writings and expecting the same from public. Words are the weapons through which anyone can spread awareness but yes, only with the right use. And this is what exactly she’s doing on the platform of Marham.