Cinnamon Side Effects – Is Cinnamon harmful for you? 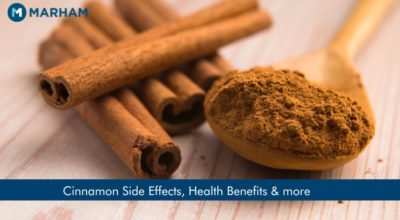 Cinnamon rolls are a very popular dessert choice, sprinkled with this miracle aromatic condiment all over the top. But have you ever wondered what are the benefits and cinnamon side effects?

Cinnamon is a favorite household spice that is taken from the inner bark of an evergreen tree, species of the genus Cinnamomum. The bark is sun-dried and then it rolls into curls.

This widely used aromatic flavoring condiment rules over sweets, savory recipes, and beverages as well. It is the most common spice used in the United States and Europe.

We all use this aromatic condiment to add flavor to our food. Cinnamon health benefits are many but the excess of it can cause a number of adverse effects.

Read to know what cinnamon overdose can lead to!

According to the US department of health, the recommended dose of cinnamon is 6g daily for 6 weeks or less.
Exceeding the dose may result in several toxic effects. Cinnamon side effects got very popular, especially after the viral cinnamon challenge.

Do you know about the Cinnamon Challenge?
A challenge went viral on the internet in 2007. The participants were supposed to eat a spoonful of cinnamon powder without drinking any liquid with it and while doing so, they were to film themselves.

This stunt proved dangerous as cinnamon choking and accidental inhalation cause liver damage, mouth sores, tissue irritation, inflammation, and hypersensitivity reaction.
Hence, consuming too much cinnamon can be life-threatening or fatal.

Cinnamon is a condiment or a remedy to treat the above-mentioned diseases however, by no means cinnamon can be used as a replacement for medicines or drugs.

Cinnamon side effects due to its increased consumption include;

One of the cinnamon side effects includes liver damage. An important ingredient in cinnamon is coumarin. The percentage of coumarin varies in different types of cinnamons (cassia contains the higher percentage).
Coumarin-containing foods were also banned by the FDA due to their hepatotoxic effects.
It is also reported that cinnamon, together with statins, may cause significant liver damage and hence should be avoided in patients with hepatitis.
The liver-induced damage is more common in people sensitive to cinnamon. They can develop the symptoms when they consume foods, drinks, or any supplements containing cinnamon.

Hypoglycemia is a decreased blood sugar level. Cinnamon has been used for a long time among different populations including Ancient Egyptians & Japanese.
Studies show a drastic decrease in plasma glucose levels due to cinnamon. When consumed in doses higher than the recommended doses, the chance to develop hypoglycemia spikes up.
Hypoglycemia can cause dizziness, tiredness, and even fainting.
However, more supporting research is needed to support the argument about the effects of cinnamon on insulin management.

It can cause breathing issues

Coughing and gasping for air have been among the commonly reported cinnamon side effects even during the Cinnamon challenge.

Research in children provided evidence that consuming too much of powdered cinnamon can cause aspiration pneumonia, pulmonary inflammation, and scarring.
Inhalation of spices like cinnamon may cause allergic reactions in people with sensitivity. In non-allergic individuals, cinnamon inhalation may result in coughing & choking.

It can cause mouth sores

Cinnamon contains components like cinnamaldehyde, cinnamic acid & cinnamon essential oils. These components are abundantly used as flavoring agents in oral-hygiene products, foods & beverages.
These can cause inflammation and oral lesions.

A high intake of cinnamon and related products can cause mouth sores. Itchy rashes, pain, and inflammation are also very common, especially in allergic individuals.

This cinnamon side effect was also reported during the cinnamon challenge.

It can cause allergic reactions

If the condition remains untreated, death or coma may result.
The quality of life with cinnamon allergy may decrease hence such individuals need special dietary and general considerations to avoid consuming food and cosmetics even with traces of Cinnamon or related flavors.

It may cause interactions with drugs

Cinnamon side effects may get worse by interaction with other drugs you are taking. If you are consuming any medicine, beware of the consequences of drug interactions with cinnamon.
Cinnamon may either have synergistic effects on the medicines or intensify their side effects.
Some of the interacting medicines include;

Consult your doctor before the concurrent use of cinnamon with these drugs as the cinnamaldehyde, coumarin and other components might cause the listed cinnamon side effects.

It can induce premature labor

Although cinnamon can be beneficial to your general health as well as digestive health, which is a basic concern, especially in pregnancy, consuming too much cinnamon in pregnancy can induce premature labor. Hence, cinnamon should be avoided during pregnancy.
Cinnamon containing cinnamaldehyde can induce uterine contractions hence as a general rule, it is contraindicated in pregnant women.
Adding cinnamon to your savory dishes or desserts in small quantities is completely safe.
However, exceeding the recommended dose can lead to abortion. This cinnamon side effect limits its use in pregnant females.

Tip: These all cinnamon side effects can be avoided just by using it in moderation.

Cinnamon is a spice that was once traded as currency. This flavorful condiment has many health benefits for the heart, digestive system, cancer, headaches, and a lot of other conditions. It is by no means a substitute for traditional medicines and therapies but only an additional supplement used as a home remedy. However, consuming too much of this aromatic condiment can lead to major cinnamon side effects & toxicity affecting your mouth, lungs, and liver and may lead to other serious conditions.

Cinnamon is known to relax and dilate your blood vessels. This causes the systolic and diastolic blood pressure to drop. This antihypertensive effect can also help in preventing many heart diseases.

2. Does cinnamon cause constipation?

Cinnamon is a natural laxative and helps your digestive system in relieving constipation. The prebiotic effect of cinnamon can also help in treating flatulence and other digestive discomforts.

3. What are the side effects of eating cinnamon?

Exceeding the recommended amount (6g/day) can lead to cinnamon toxicity affecting your liver, causing mouth sores, allergic reactions, and hypoglycemia. Liver damage is the most common cinnamon side effect.