Medicine Prices Cut Down by 30%, announced by the Federal Cabinet 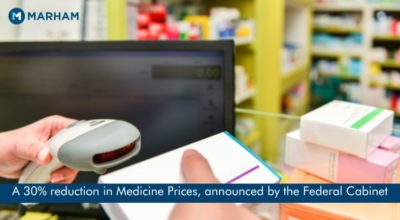 The new year started with a good news for Pakistanis as the Federal Cabinet announced cutting down the prices of 20 medicines.

The spokesperson of the Ministry of National Health Services, Government of Pakistan, told the public that “the cabinet has implemented a 30% reduction in the prices on a list of 20 important medicines.”

This decision was made on the recommendation of Abdul Qadir Patel, the minister of Regulations and Coordination at National Health Services.

Moreover, the sources from NHS also claimed that another proposal was presented to the government of Pakistan. In that proposal, price decrease for 54 more medicines was requested. The government also accepted this proposal.

On this news of relief, the Regulations and Coordination minister, Abdul Qadir Patel, stepped up and congratulated the nation for having a sigh of relief on medical grounds. He believes that this initiative aims to provide relief to the poverty-stricken nation of Pakistan, especially those suffering from prolonged diseases like cancer, hepatitis, diabetes, leukemia, etc.

With this, he added that “it should be noted the former government of Pakistan had increased the prices of medicines up to 700%, which was a huge burden for the poor community of Pakistan.”

With a knack for translating thoughts, actions, and authentic information into words, Eiman is a Literature Geek with a healthy habit of reading. She is a fiction novelist, poet, and a medical writer who writes not only for self-pleasure, but also for the sake of humanity. She believes it’s writing with which truth and right can be out. Withal, she is a thinker, researcher, and analyst. Her passion for research always leads her to new pathways. One of these pathways connected her to Marham.pk, where she aims to apply ‘Marham’ on the ailing-aching humanity with her well-researched, curative content.